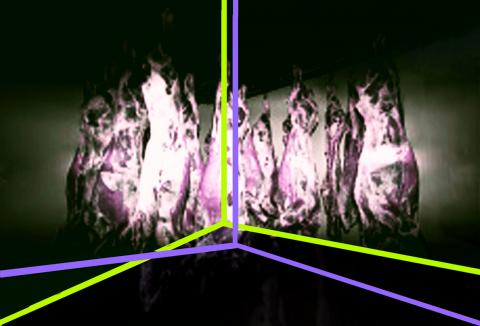 Schlachthaus.fresh&fine art I We All Love Art

In 1981, encouraged and inspired by the Polish labor movement Solidarność, Ryszard Wasko organized in Lodz the largest independent exhibition of contemporary art ever to take place behind the Iron Curtain.
Martial law was imposed in Poland. The artist emigrated and developed his Construction in Process six times more: In a wide variety of locations around the world, including the Negev desert. The creative process of art was consistently at the forefront of this exhibition series that became part of art history. Describing Wasko’s basic intention, the critic and artist Robert C. Morgan wrote recently that Wasko “understands art as a condition of the international community that invites cultural exchange. This practice widens the perspective on art and enlarges consciousness in relation to life.”
With this dynamic approach Wasko creates We All Love Art. It reaches back directly to the ideas of Construction in Process.
The fire of a new thought is almost impossible to put out once it has been released into the world. We All Love Art inaugurates a new space for Schlachthaus.fresh&fine art. This show gives currency to a romantic vision of achieving a worldwide understanding of humankind. It gives awareness of solidarity, transformative movement, and art.
Ryszard Wasko, who lives and works in Berlin since 2008, seeks out and engages the most diverse range of international artists for collaborative work. His intention with We All Love Art is nothing less than to rekindle the creative spark of a new sensibility. Wasko was program director at MoMa’s PS1 in New York from 1990 to 1992. Constanze Kleiner, director of Schlachthaus.fresh&fine art, organized the largest retrospective to date of Wasko’s work in 2013 at TRAFO Center for Contemporary Art in Szczecin, Poland.
Ryszard Wasko was recently named winner of the Francis Greenburger Award, which was presented to him in New York in April 2017.